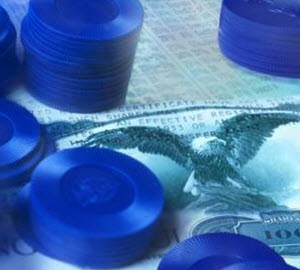 The phrase blue chip stock was coined by Oliver Gingold of Dow Jones in the early 1920’s. Back then, a blue chip stock simply meant a high-priced stock, a reference to how many poker establishments used the color blue for their most valuable chip. According to Dow Jones folklore, Gingold was watching the stock ticker at a brokerage firm (that would eventually become Merrill Lynch) together with Lucien Hooper of W.E. Hutton & Co. Noticing how several companies had shares selling for $200 or $250 a share or more, Gingold told Hooper that he intended to go back to the office to write “about these blue-chip stocks”.

The stock price of a blue chip company tend to follow the S&P 500 stock market index.

At the time of writing, the Dow Jones Industrial Average consists of the 30 U.S. companies listed in the table below. As you can see, many of these companies have been a part of the index for a long time without interruption, with General Electric being added in the year 1907, ExxonMobil (then Standard Oil of New Jersey) in 1928 and Procter & Gamble in 1932.

The Dow Jones & Company was formed by Charles Dow, statistician Edward Jones and journalist Charles Bergstresser in 1882. Their first market index was the Dow Jones Transportation Average, dating back to 1884. The Dow Jones Average was first published in 1885, while the Dow Jones Industrial Average followed in 1896.

Today, the industrial portion of the name Dow Jones Industrial Average is largely there for historical reasons, since many of the 30 companies currently on the list has little or nothing to do with traditional heavy industry.