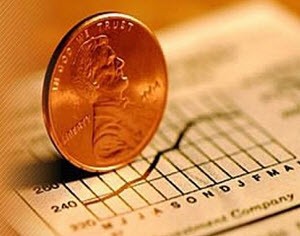 Although there is no general, internationally accepted definition of the term penny stock, common shares of small public companies that trade at low prices per share are usually referred to as penny stocks. An alternative name is cent stock, and in the United Kingdom the term penny share is common.

Penny stocks in the United States

Information about penny stocks in the United States can be found in the penny stock rules (Exchange Act Section 15(h) and Exchange Act Rules 3a51-1 and 15g-1 through 15g-100).

U.S. Securities and Exchange Commission (SEC) states that the term penny stock generally refers to a security that is

A.) Issued by a very small company, and

In addition to this, SEC highlights how penny stocks generally are quoted over-the-counter (e.g. at the OTC BullentingBoard or OTC Link LLC), although SEC also acknowledges that penny stocks can trade on securities exchanges and that securities of certain private companies with no active trading market also can fall into the category ‘penny stocks’.

Here are a few reasons why investing in penny stocks is considered risky.

When it comes to stocks, liquidity is the ability to convert a stock to cash quickly (“marketability”) and the degree to which stock can be bought and sold in the market without affecting stock price. Stocks with a high liquidity is characterized by a high level of trading activity.

Penny stocks tend to have a very low liquidity. This means that it can be difficult to quickly find a buyer when you want to sell your penny stocks, and that even fairly small transactions can have a large impact on stock price. 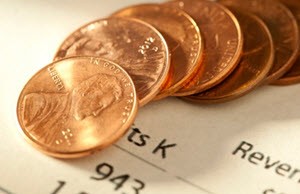 Penny stocks are often traded over the counter (OTC) rather than being listed with stock exchanges. This makes is more difficult to find (reliable) information about the company, and the companies are usually subjected to much less regulation and public scrutinizing. For instance, in the United States, companies listen on the pink sheets are not required to filed with the Securities and Exchange Commission (SEC).

As mention above, most penny stocks are traded over the counter (OTC). A company listed on an exchange such as NASDAQ or the London Exchange must adhere to certain minimum standards to be allowed to remain listed with the exchange. For stocks traded OTC there are no such exchange-based minimum standards.

Sometimes, the reason why a stock is traded OTC rather then being listed with an exchange is that the company fails to live up to the minimum standards of an exchange.

Low price and low liquidity make penny stocks appealing to stock price manipulators. Below you will find two commonly used schemes. They are not unique to penny stocks, but manipulators will often pick penny stocks for their operations since these stocks have the characteristics listed above and a low purchase price.

In the United States, companies selling stock outside the U.S. to foreign investors are exempt from registering stock with the U.S. Securities and Exchange Commission (SEC). Some companies will use this loop hole to avoid registration. They sell their stock at a discount to offshore brokers, who in turn sell them back to U.S. investors. 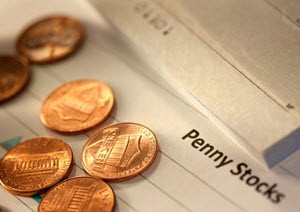 In a pump-and-dump, an investor purchases large amounts of stock, hype it up and sell it off quickly once the price has increased. False, vague or misleading statements are used to hype up the stock and get other investors interested. Once the original investor has sold off his or her stock and made a profit, there is no longer a need for him/her to keep artificially inflating the price. As a result, the price often falls rapidly. Also, the selling of a large amount of stock in the company can in itself trigger a downward spiral for the stock price.

In many jurisdictions, a pump-and-dump is illegal. However, it is often difficult to prove who’s behind a pump-and-dump, and skilled manipulators will act in the gray areas of the law. For instance, to avoid getting into legal trouble, many penny stock newsletters have a (very fine print) disclaimer at the bottom that in essence say that they are getting paid to promote certain companies.

Internet has made pumps-and-dumps easier to carry out, since you can reach a large audience of potential investors in an easy and cost-effective way. An schemer can for instance use e-newsletters, investment forums, Facebook, Twitter pod casts and “informative” videos to get the message out.

Some schemers will even retort to spam (both mail-spam and SMS-spam), but a random spam message is of course less likely to be trusted than a seemingly well-researched pod cast published on an investment site.

N.B! Information is not automatically trustworthy just because it is sent out in the form of a press release or ends up in a news article.

A commonly heard misconception when it comes to penny stocks is that all companies that are now large-cap or mega-cap companies started out as nano-cap or micro-cap. Investors erroneously believe that companies such as Microsoft and Wal-Mart started out with penny stocks and then gradually increased in value until they became what they are today.

The price for Microsoft on its first day of trading was $21. Definitely not a penny stock! The price adjusted for splits will however be showed as roughly $0.08. It is not difficult to understand how someone can be under the assumption that Microsoft started out as a penny stock company with shares worth 8 cents a piece. In reality, Microsoft actually started out with a high market price that then soared even higher, causing the need for splits.

What is a micro-cap stock?

Sometimes you will see the terms penny stocks and micro-cap stocks used interchangeably, but there is actually a bit of a difference between the two. As explained above, one very important criterion for determining if a stock is a penny stock or not is the individual share price.

What is market capitalization?

You get the market capitalization by multiplying share price with the total number of outstanding shares.

Example: If share price is $3 and the number of outstanding shares are 100 million, the market capitalization for that company is $3 x 100 million shares = $300 000 million.

What is nano-cap stock?

Nano-cap stock tend to be even more volatile than micro-cap stock.